Though descendant’s from the original owners of Lisheen Castle, the Lloyd family, have since spread out across the world, the Everard family have received visits from members of the family from the USA, Canada, Australia and South Africa. The visit of Mr. Ross Lloyd from Durban, South Africa in 2009, not only fulfilled his life long ambition to return to the land of his fore bearers but also reinforced the special nature of Lisheen Castle to the Everard family.

Mr. Ross Lloyd was 90 years of age on his visit to Lisheen Castle, but remembered living there as a young boy. He was able to help the Everard family by recounting stories of castle life almost a century ago and pointing out small but important and often overlooked tell tales of the Lloyd family’s life in Lisheen Castle. While you take a walk around the exterior of the castle, can you spot the initials RL carved into a corner stone on the front of the building. Mr. Lloyd revealed that this was carved over 100 years ago by his father. Mr. Ross Lloyd fulfilled his lifelong ambition of a visit to the restored Lisheen Castle. The Everard family were so touched by his kind nature and delight at the beautiful restoration of his family home, that they chose to honour him by naming his childhood bedroom in his memory.

This bedroom offers the trademark four poster bed. A mixture of antique Georgian and Victorian furniture and all modern conveniences you would expect of  a luxury accommodation provider such as flat screen TVs and ensuite facilities. 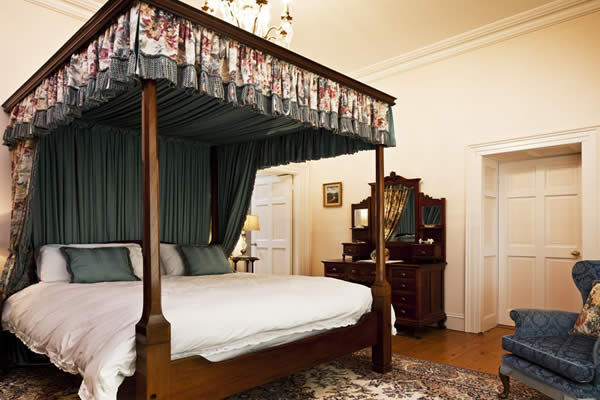 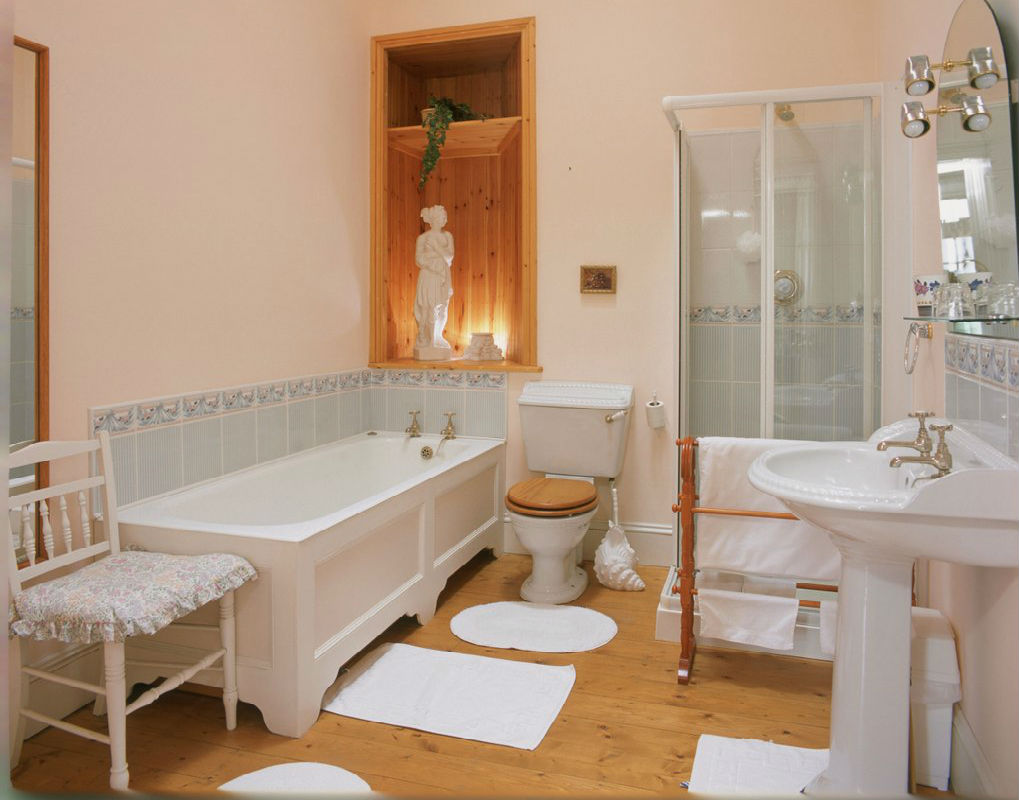 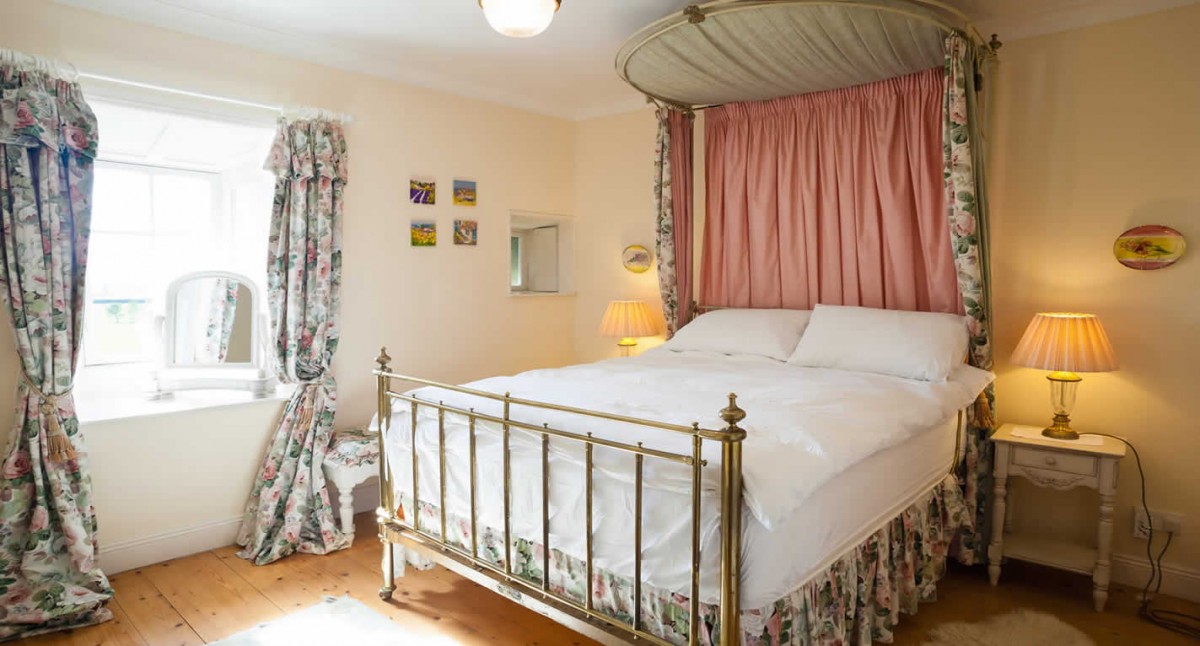 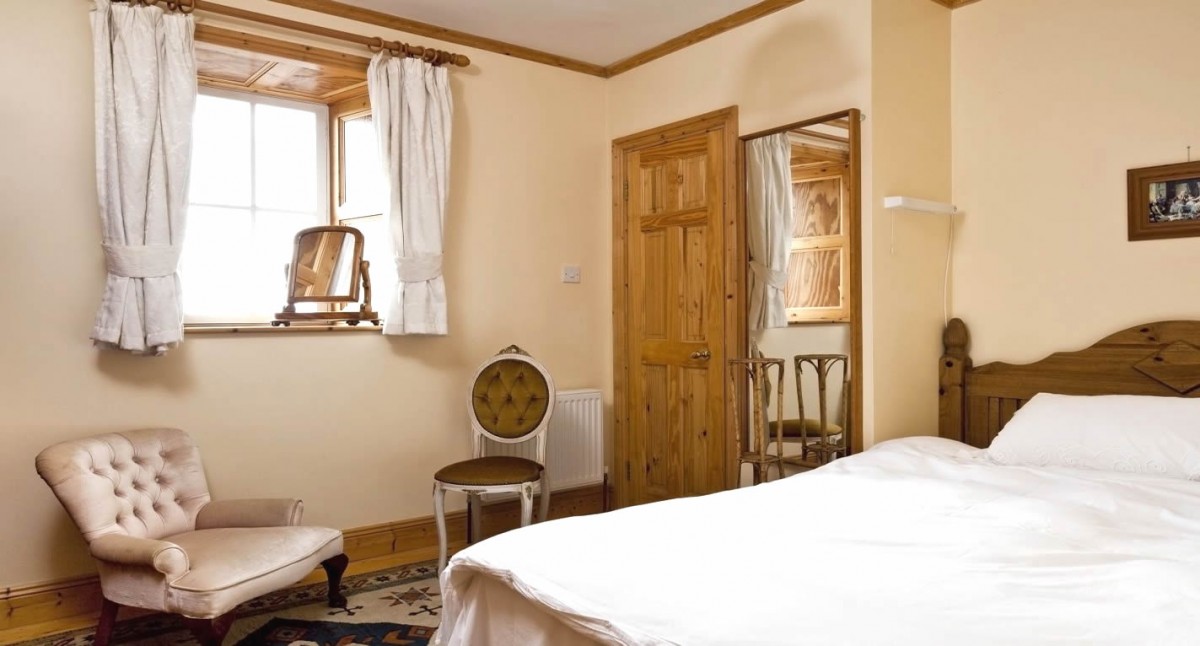 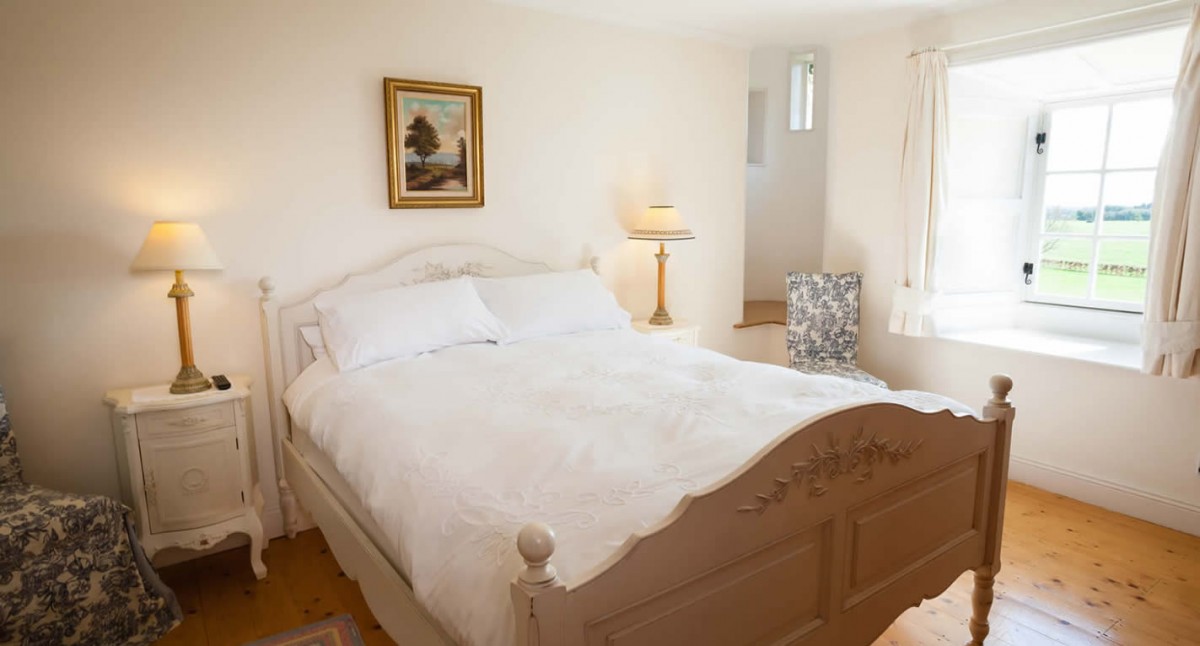 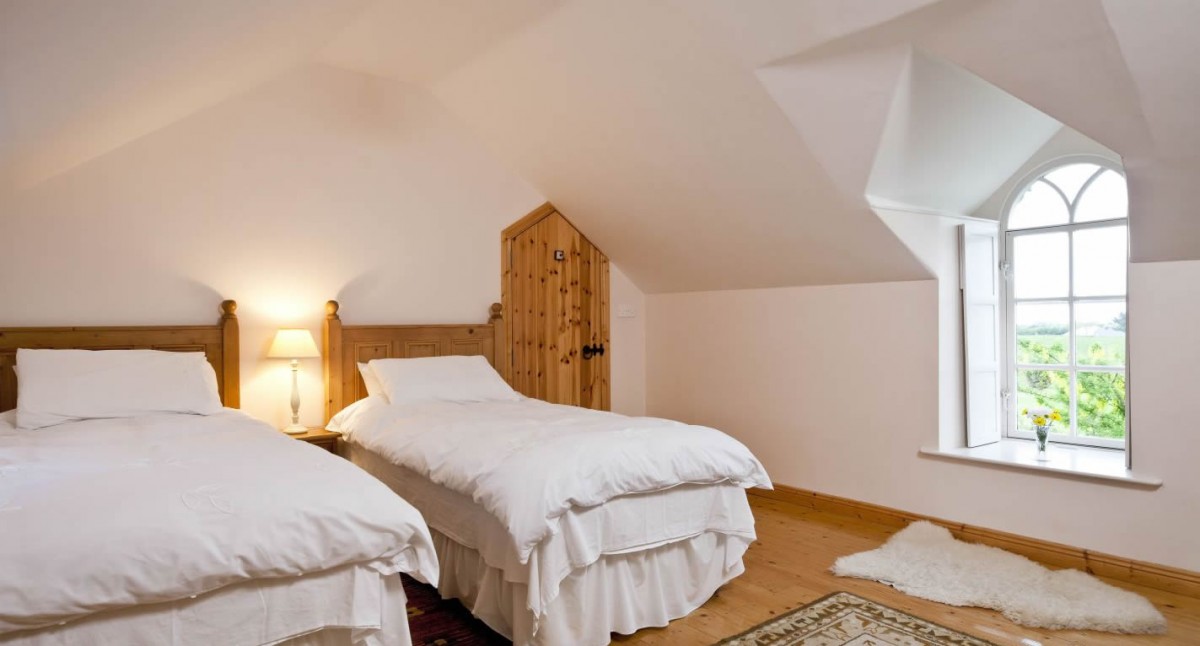 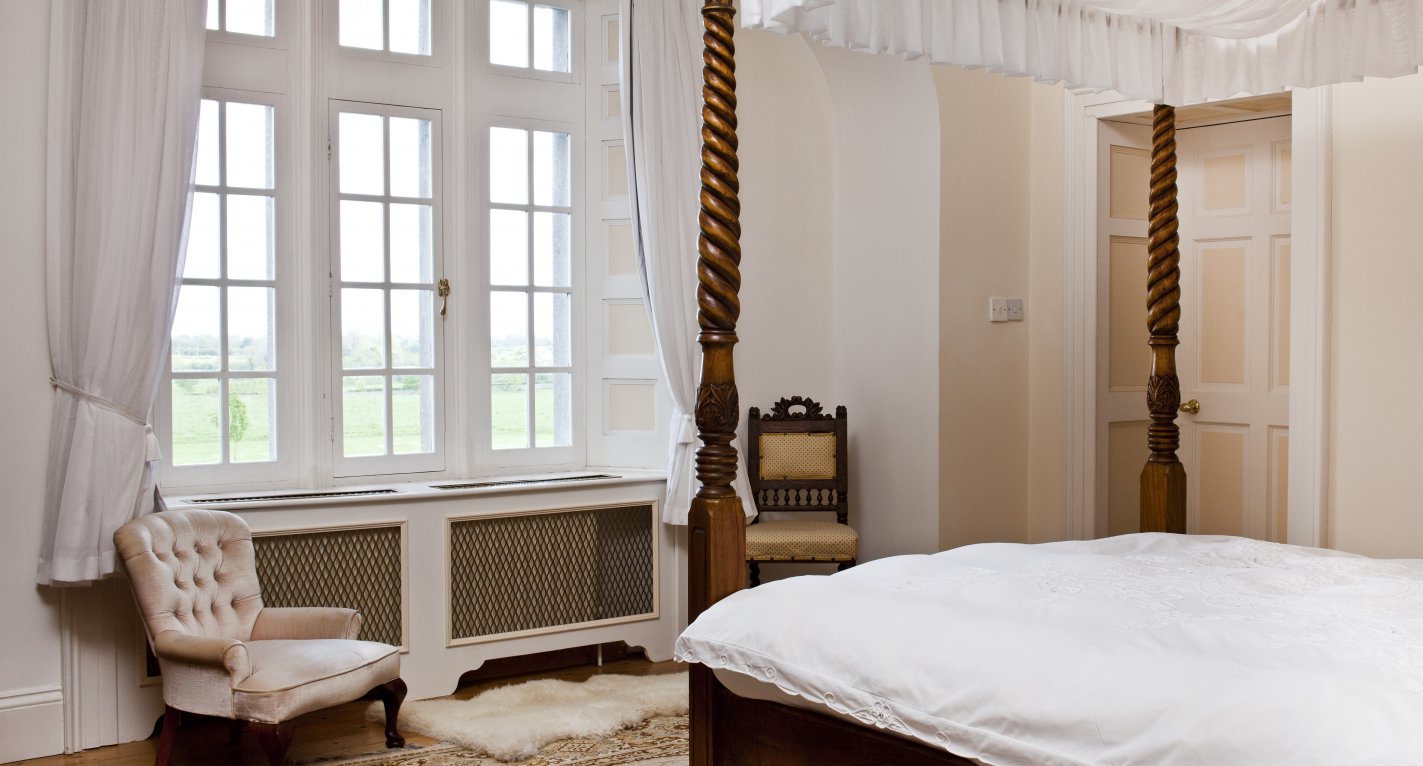 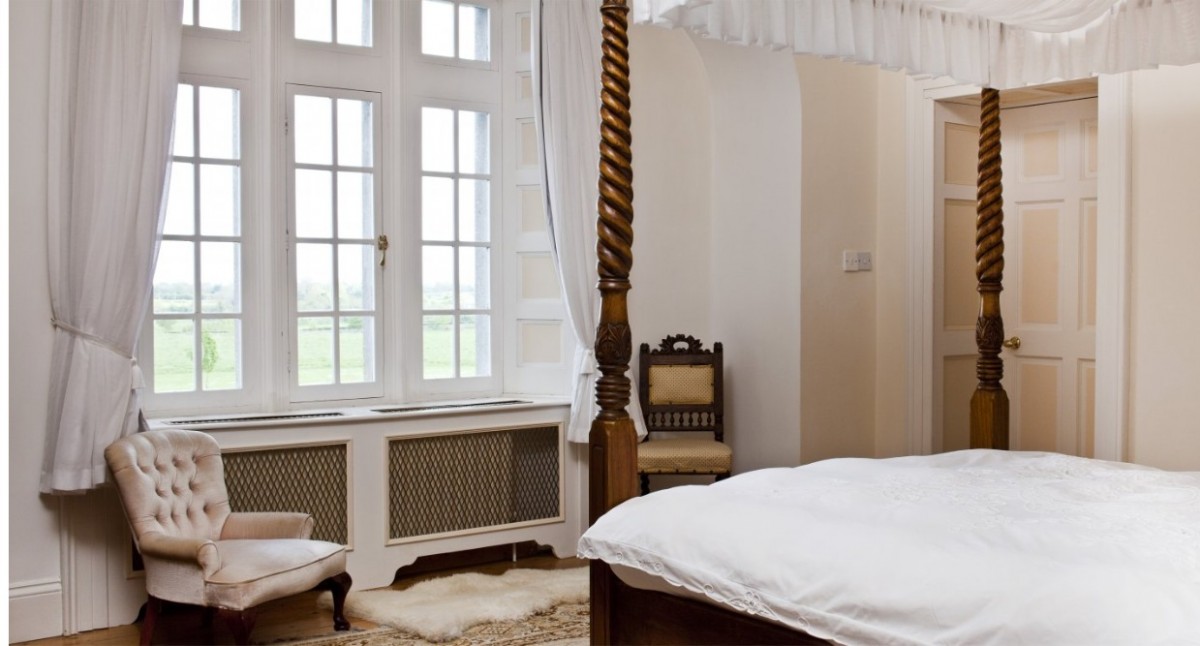 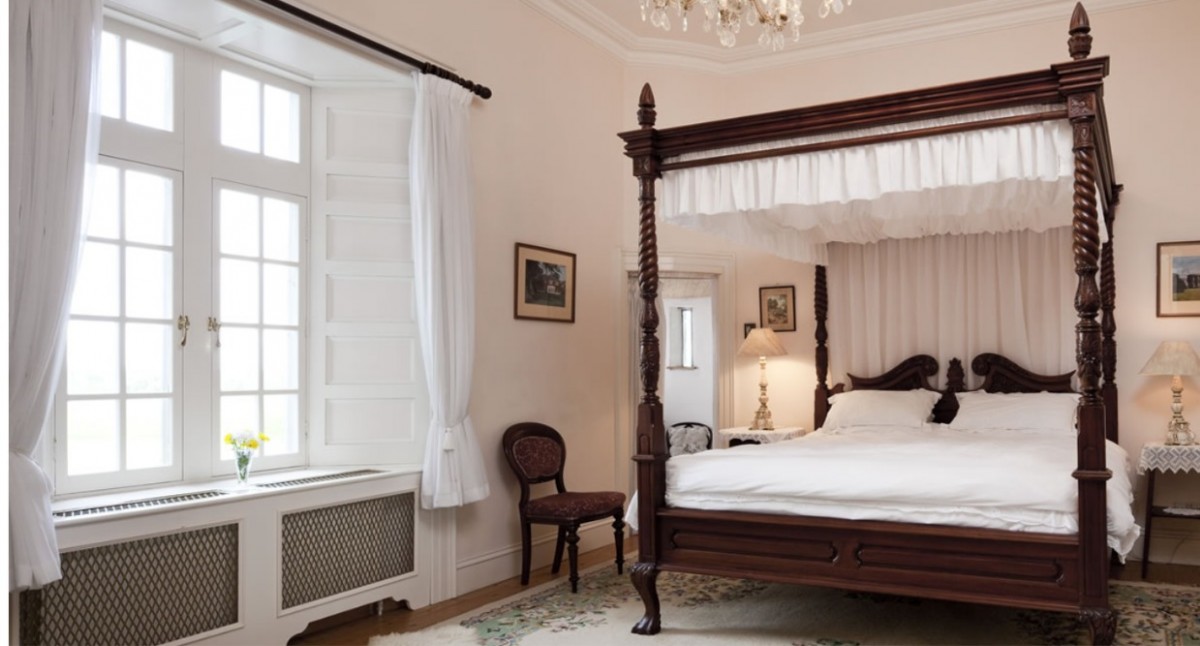 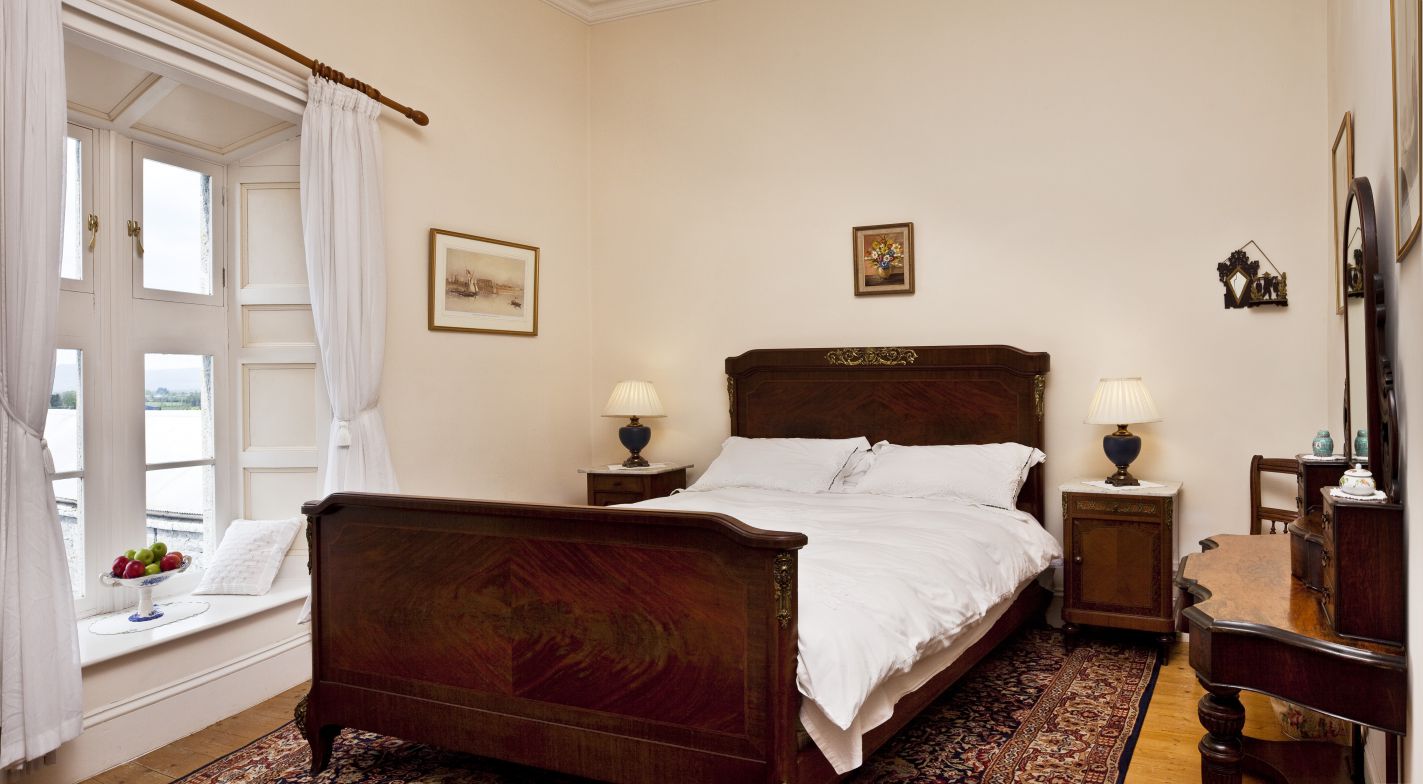 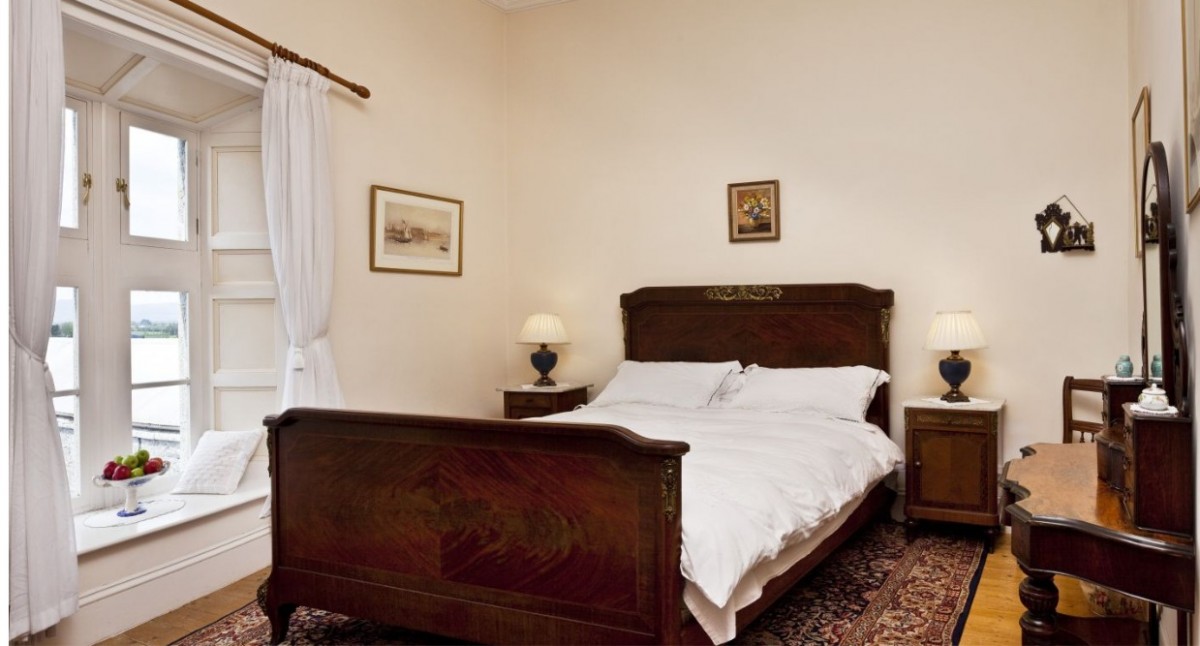 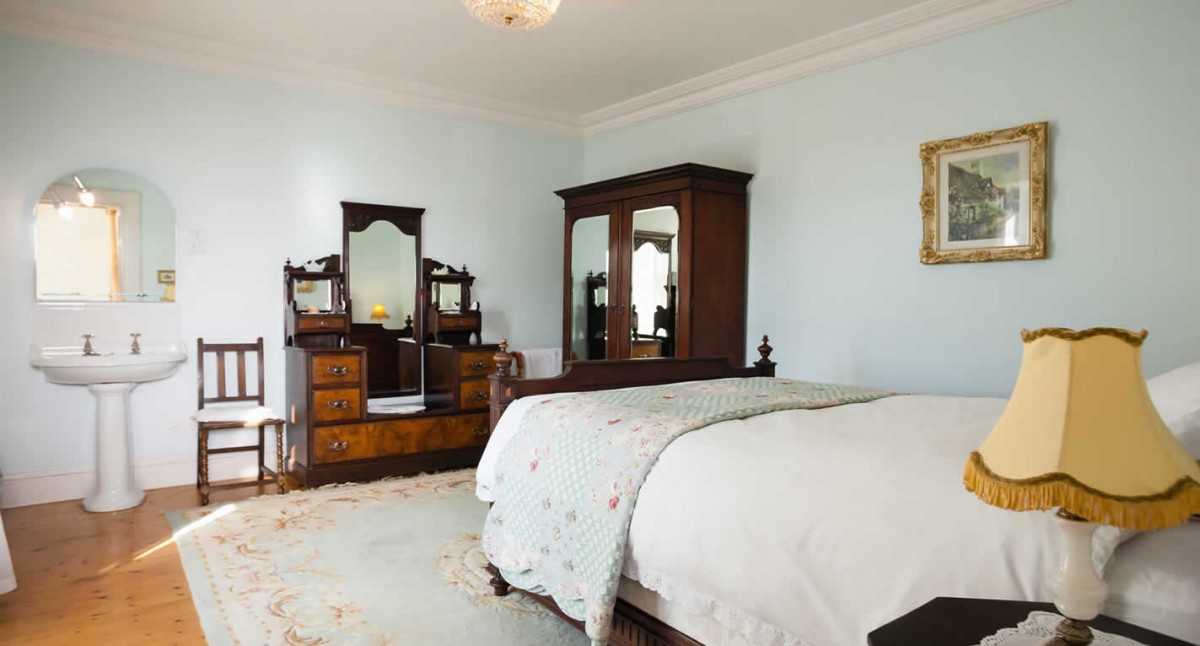 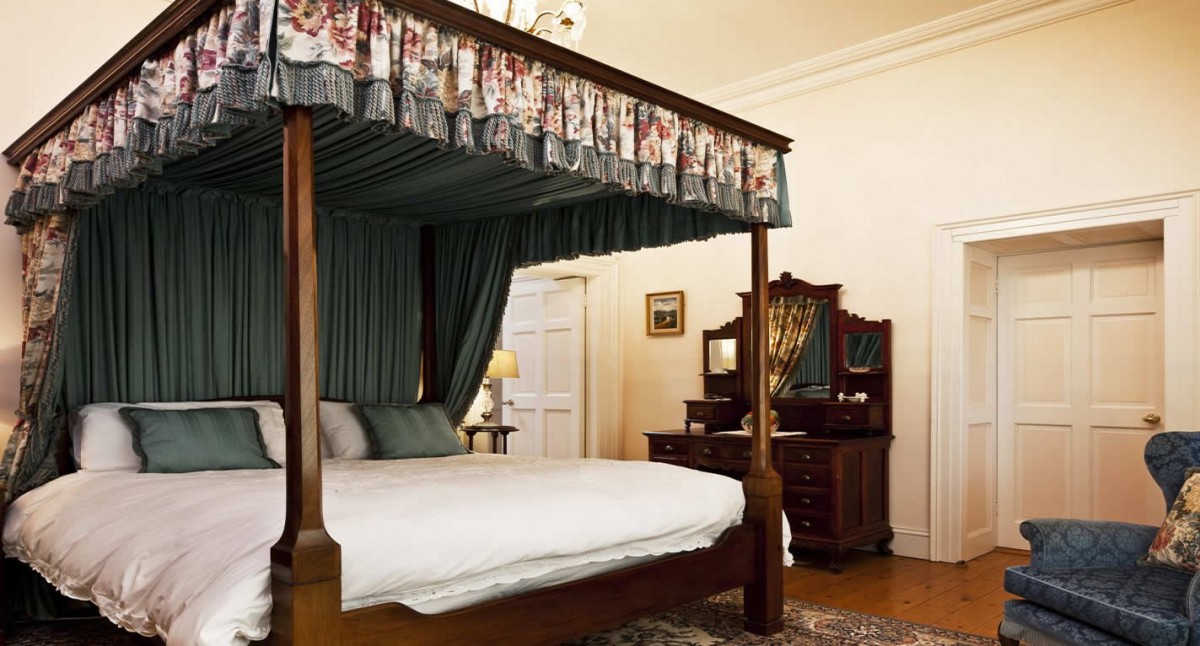 Looking For Something A Little Different?

Lisheen Castle has been an inhabited site for centuries, but the lovingly restored manor house is largely from the 1800s. There is a lot of history here. If you like tranquility and serenity as well, you can also find it here.

The “castle” is well stocked with everything that you need for a great stay here. Especially as it pertains to the very large kitchen. Everything that you need to prepare great meals is here in terms of implements and there is a great spice rack. There are two very large refrigerators and a large industrial stove. Lots of dishes and glassware. You won’t be bored as there are books to read in the library, CDs and DVDs to watch. There is a washer and a dryer for clothes. There are bicycles to ride and the neighboring herd of cows is very friendly and curious.

The venue is located more or less in the center of the Ireland and therefore well situated as a base for touring many places on the island. Zane was a great host and easily went the extra distance to accommodate some extra requests. He is also well versed in the history of the area. We had a fantastic time, and it was a good value. Bring your friends, its more fun if there is a group of you.

Trip Of A Lifetime

We celebrated our 50th anniversary with our children and grandchildren at Lisheen Castle. All the planning and excitement were exceeded by the reality. With 7 children ages 5 to 12 the outdoor activities were fantastic. Chef and lovely beyond Ursula provided a true Irish welcome. Patrick was a delight and Lisa rounded out the team.

We think the full package is a bargain. Everyday we were off to anywhere our hearts desired. The team who provided our tours was fantastic. Having been to Ireland 8 times over the years I can truly say our stay at Lisheen was a glimpse into the heart of the country. The castle, the food, the people and especially Zane.

It is impossible to overstate how special it is. The premiere county lived up to its monicker. Thank you all for making it a trip none of us will ever forget. With great affection.

Our stay at Lisheen Castle was a dream come true. Twelve of our family making memories in the storied land of Ireland. Zane is an exemplary host. We chose to do the tour package and it truly made our stay carefree. The food was amazing and the guides provided for our daily excursions were knowledgeable and so nice.

Zane was very accommodating when we asked to alter one of the days so we could visit a place that isn’t a standard attraction in Ireland. When six of our group were delayed in the USA due to weather, Zane managed our schedule so everything worked out perfectly for all of us.

I wholeheartedly recommend a stay at Lisheen Castle!

Over The Top Castle Experience

Lisheen Castle was the perfect place for my family’s vacation.

There were 12 of us and our experience there was over-the-top. Bedrooms were spacious, the beds were comfortable and the bathrooms were large and clean.

There is a huge WOW factor about this place. All the other rooms have their own great character and we love the library the best for evening drinks. Zane, the owner, has put in a tennis court in the back plus supplies the rackets and balls. There is also a play scape for kids and a couple of bikes to use if you dare go out on those narrow roads.

I would highly recommend going with the package deal to really enjoy yourself and relax. I would most definitely recommend Lisheen Castle to other family members or friends.

What impressed me the most about this glorious castle is the feeling I got when I walked through the door. Photos did not do it justice…..it’s stunning one room after another.

The attention to detail is impeccable so that you get to appreciate what life looked like during the period, but with all of the modern amenities of today. From the heated blankets on the bed, to the cozy tv room and library, you could easily go to any room to relax and bask in peace. I took a personal fondness to the eat in kitchen, complete with Aga stove, always warm and welcoming. I could have stayed the entire week in this place alone and had the vacation of a life time.

And….if that wasn’t enough, Zane (a most excellent host) was kind and helpful and informative! He stocked the kitchen and was always a phone call away for a suggestion on whatever you felt like doing for the day. He was gracious and went above and beyond his duties. Please consider visiting this awesome castle….you will not be disappointed, and it will make you want to plan your next visit there as soon as you leave!

We were doing a combination family genealogy and sightseeing trip to the Thurles area since a part of my wives family and my family originated in the area just miles apart from each other. We had a mixed group of people with us, some family, some friends, and friends of friends.

Because of the beautiful castle we were to stay in, and the attention to detail that Zane paid to everything we were able to relax and get to know our new friends on the very first night. We had a “package tour” put together by Zane, which included transfers from the airport in Dublin and back at the end of our stay. We were picked up and hit the ground running with tours of Dublin.

When we got to “Our Castle”, Zane met us there and gave us a tour, then literally turned over the the keys to the castle to us and that was our home for the week! Each day after a traditional Irish breakfast prepared for us by chefs that fixed us breakfast and dinner, a motor coach picked us up and took us to amazing places.

Everyone associate with Lisheen Castle were friendly, knowledgeable, helpful (we had one person needing a wheelchair), and professional, we felt like were with family the entire time. I hope we can go back there again in the future.