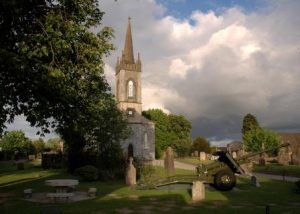 This small museum is preserved presently in a building, portion of which dates back to early Norman times (1290) and contains one of the largest collections of original Great Famine (1845-1849) memorabilia held in private collection, presently in Ireland.

Amongst the exhibits included on display at Thurles Famine Museum, Co Tipperary are:-
(A) The only original hand written minutes of a Famine Food Committee now in existence today. Same minutes record the day to day efforts by a local committee, during the years 1846-1848, in Thurles and the nearby towns-land of Rahealty; their aim to provide food and other supports for a population of some 12,000 starving people.

(B) The original signatures of two Irish Confederation members, namely Thomas Francis Meagher (Later who later became Brigadier General Meagher leader of the Irish Brigade in the American Civil War of 1861 to 1865) and Irish Nationalist revolutionary Patrick O’Donoghue, both of whose signatures are written on the cover of a prison library book entitled ‘Wreath Of Friendship’; while both were detained in Richmond Prison, Tasmania, following the Ballingarry, Co. Tipperary uprising of 1848.

(C) The only original hand written book now in existence today, which contains full detailed names and addresses of all families who were granted gratuitous relief via soup kitchens, in Thurles and the surrounding areas during the Great Famine year 1847. This ‘Gratuitous Relief Book’ also shows the portions of food provided to each individual, on a daily basis. The recently discovered ‘Gratuitous Relief Ration Record Book,’ (or the ‘Distribution Book’, as it was also called,) for the electoral divisions of Holycross, Thurles and Ballycahill in 1847, has now been digitized, allowing an instant search facility for those anxious to trace their family roots.

Here no time limit is set for visitors; with the museum open outside of normal business hours (Normal Business Hours 10.00am – 4.30pm) to accommodate the needs of all/any persons spending vacation time at Lisheen Castle.

Note, a qualified historian and guide is provided to all Lisheen Castle visitors.