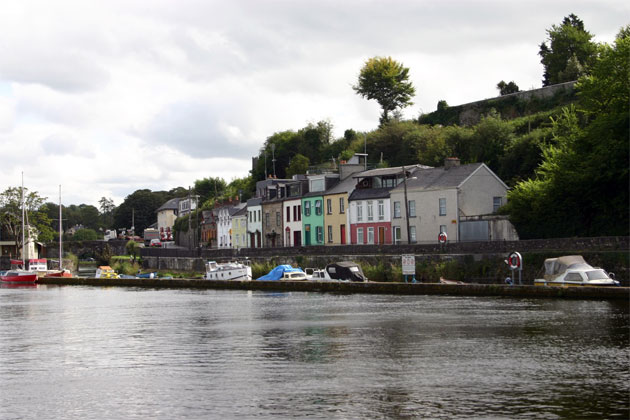 The twin towns of Killaloe, County Clare, and Ballina, Co. Tipperary Ireland, stand either side of the River Shannon on the southern end of Lough Derg. Only an hour’s drive from Lisheen Castle, it is a popular spot to visit by both tourists and locals alike because of its scenic beauty, lakeshore activities, tasty dining spots and not least of all it’s quaint charm. The surrounding area is very popular for hill-walking.

The Diocese of Killaloe owes its existence to the first High King of Ireland Brian Boru (c 941-1014) who ruled the Kingdom of Ireland from here (1002-1014). Brian was born in Killaloe, the youngest son of Cennedig (Kennedy) who was head of the tribe Dal Cais. 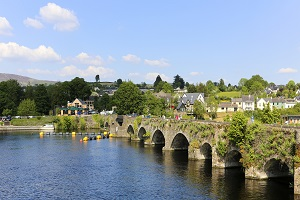 The earliest mention of a (wooden) bridge across the river is in 1013. This was often repaired and eventually replaced by a 17 arch stone bridge in the early eighteenth century, later reduced to 13 arches. Most of the houses in the lower part of the town were built in the eighteenth century. In the nineteenth century the Shannon Steam Navigation Company had its headquarters here and constructed a canal to bypass the rapids below the town.

Because of it’s strategic position on the river Shannon, in the 19th century Killaloe became a hub for transportation of goods and passengers up the River Shannon from Limerick to Portumna, Athlone, and Banagher. From here the goods were transported by canal boats to Dublin.

Today fishing, cruising, boating, sailing and swimming are just part of the many activities on the lake adding to the rich heritage waiting to be explored in modern day Killaloe.

You can view further information on the attractions and specific places to visit, such as St. Flannan’s Cathedral and the brian Boru Heritage Centre on the Discover Ireland Website and Discover Killaloe.

Want to enquire about a stay at Lisheen Castle?

You can also contact us by sending us a message on our simple Contact Us form. We will respond to you as soon as possible.
: Killaloe, Lough Derg, Shannon
Previous Post Cahir Castle Tour Next Post Experience Kilkenny Ghost Tours